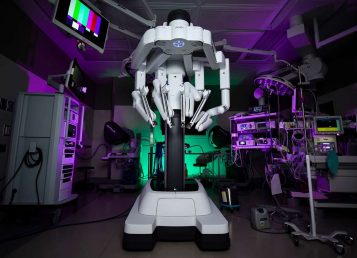 Hello Automators, it’s time to talk about robotics again and this time, it won’t be in a general way. We will be emphasizing a specific robot: The da Vinci Robot. We will talk about what has been achieved and what is expected to be achieved with it in the future.

We will tell you that it is a robot that works in one of the most delicate sectors in the world: Health. Robots like these have been on the market for some time now and their development has been on the rise, mainly because of how much they have to contribute.

ROBOTS IN THE HEALTH SECTOR

The first examples of the application of robots in the healthcare sector date back to the 1980s, with the use of robotic arms to assist in minor surgeries. Nowadays, the application of Artificial Intelligence technologies, data analysis and the execution of tasks in real time are commonplace. All this makes it possible to simplify workflows and reduce risks due to human error. In this sector they are usually classified into three main categories:

Surgical Assistance Robots: Advances in motion control techniques have made it possible to create much more precise robots, increasing levels of speed and accuracy. Some surgical robots may even be able to complete tasks autonomously, allowing surgeons to monitor procedures from a console.

Modular Robots: In healthcare, there are many, many robotic arms, legs or full-body exoskeletons that are often used primarily for therapeutic purposes to help with rehabilitation after stroke or traumatic brain injury. In addition to disabilities caused by multiple sclerosis.

Surely you have heard about this specimen before, but here we will give you the most important and interesting facts that will surprise you.

It was created by one of the pioneering companies in robotic-assisted surgery, Intuitive. Da Vinci is a series or family of surgical robotic systems, but make no mistake, they are not autonomous, that is, it is the assistant of a surgeon, who performs the surgery through the instruments and arms of the system, which reproduces the movements in real time, but with a greater range of mobility and precision.

To date there are 4 models or versions of the da Vinci Robot available: Da Vinci SI, Da Vinci X, Da Vinci XI and Da Vinci SP. All of them allow performing minimally invasive surgeries. All these systems are composed of three fundamental pieces of equipment:

A robot of this caliber, of course, must follow certain rules and regulations in order to be able to perform different medical procedures. So far, they have been allowed to officially perform, in certain countries, cardiac, colorectal, gynecological, head and neck, thoracic, urological and other general surgeries such as hernias and gall bladder surgeries.

It is worth highlighting a recommendation always made by the manufacturers themselves, which is that patients should always talk to their physician. This is the only one qualified to decide whether or not surgery with the da Vinci Robot is right for them. Currently thousands of surgeons have been trained on the da Vinci Robot and have performed more than 10 million procedures.

Please note, we are not recommending that they use this surgical procedure. While we support any technological idea or product that increases the quality of life for humans, we are not doctors.

We do recommend, however, that in addition to consulting your doctor, you visit pages of procedures that have already been performed and possible results.

We are living in a golden age of innovation and technologies, including Robotics. This evolution will result in robots becoming 100% autonomous. Can you imagine the da Vinci Robot operating on its own?

As an advantageous result of this, doctors and nurses will be able to spend more time making important decisions and providing direct assistance to patients in need.

Concluding with the da Vinci Robot

So much for today’s article!

Remind you that we always appreciate your support with a Like. Also if you share this article with friends and acquaintances who you think may be interested in this topic.

You can also receive all the alerts of published articles in the comfort of your Email by subscribing to our Newsletter by clicking here.

Without further ado, until the next article.

The 5 Generations of Robotics