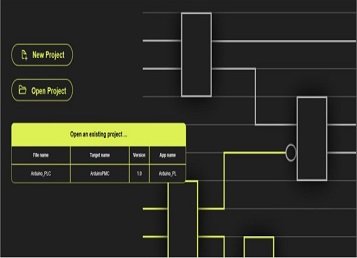 Today we bring you one of the articles that I most enjoyed writing, and is that following the line of our previous article where we talked about the Arduino Opta, a PLC based on this electronic board, today we will talk about its development and programming environment: The Arduino IDE PLC.

We leave the introduction aside and we get right into today’s topic.

If you are here and you don’t know why we are doing this article, I recommend you to follow the link below and read our previous post so you can put yourself in context.

Anyway we have to comment that recently Arduino has launched together with the manufacturer Finder a “PLC” (spoiler: it is not) which is based on one of the Arduino development boards. It is true that it seemed to us a real madness, and despite not being anything innovative in terms of the idea, the conceptualization that they have put into practice a priori promises a lot. As soon as we can get our hands on one, we promise to write a complete article about our impressions.

It is true that we knew that this device is compatible with the traditional programming environments of Arduino boards. Such as Arduino IDE 2.0 to support the default programming languages of these development boards.

What happens is that for traditional programmers who are adapted to the mythical and ancient Ladder programming this option does not work for them because it does not support this type of programming.

This is where the Arduino IDE PLC makes its triumphant entrance.

And we are delighted that the Arduino environment has decided to take the logical step of creating an IDE for this new product. But, if it is true that for the moment the available version is only compatible with Portenta, very soon it will be available for the Arduino Opta, or at least that’s what they assure us.

Below we will show some of the advantages we have observed:

Although we have seen many things that we have liked, we also have to point out some details that although we do not personally dislike, we understand that we have to put them as NOT positive points.

Although there are not many refusals that we have analyzed, it is necessary to have all the information available and to give you our opinion on the matter.

Our Opinion about Arduino IDE PLC

Although the program is free and can be downloaded directly from the official Arduino website, we believe that the cost of a lifetime license for this program is totally affordable. It should be noted that this license will allow compatibility with current devices and future versions released. Besides being a way to value and support the work of the developers who have made this Arduino IDE PLC.

I wanted this to be a fairly summarized article on the subject but that encompasses the most important. And is that there is already Industrial Hardware based on Arduino and the development environment of the same manufacturer for programming, Arduino IDE PLC.

In future articles we will make a deeper analysis of this tool and how it is to program in it.

If you liked this article I would like you to leave your best Like and in the comments your opinion about this new tool. Did you find this license expensive? We read you.

Without further ado, I say goodbye until the next article.

Arduino Opta: A LOGO more than a PLC!