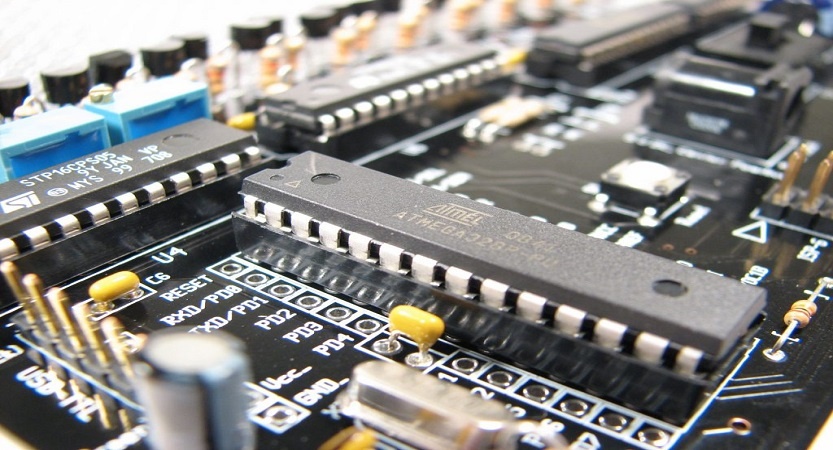 Nowadays there are many DIY (Do It Yourself) projects that are based on the famous Arduino and ESP boards. From applications that we all can do at home to products based on these ‘brains’, the diversity that can be found is immense. Despite the fact that these boards may have different characteristics, their base is the same, and they are the microcontrollers.

Microcontrollers are ‘smart’ integrated circuits which contain the three main functional units of a personal computer: central processing unit, memory and input output peripherals. Basically they process the information they receive from sensors to interact with real world through actuators.

What makes these devices so interesting is their ability to be programmed. Because ot this, a circuit behavior could be changed only by programming the microcontroller without having to modify the circuit.

Since these devices were created, they have been used in all kind of applications. Almost each device around us contains a microcontroller, from calculators to instrumentation and control systems.

With the growing rise of Internet of Things, topic which will have its space, microcontrollers have been used in a lot of new applications where connectivity is now a prime factor. Due to this, these applications can be configured and monitored remotely. A classic example is that actually, the lights in our house can be turned on and off via the Internet, and the brain of this application can be a microcontroller.

The arrival of Arduino

Although microcontrollers have been around for a long time, they have not always been as popular as they are today. Despite being the basis for popular boards like Arduino and ESP, they used to have a much more professional and restricted focus. Next we will talk about the role that Arduino played in making microcontrollers available to everyone.

Despite the many advantages that microcontrollers introduced, it is necessary to add other basic electronic components to the circuitry to ensure its correct operation. Below is an image that reflects what we mean.

The microcontroller used in this case is the Atmega 328p. It can be seen in the image how many external electronic components are necessary (and here we only show some) for its correct operation. In addition, to program it, a programmer is necessary, which is the device in charge of transferring the code from our computer to the microcontroller so that it can execute it.

As you can imagine, this was a pretty difficult process that presented many limitations for most people who wanted to enter this world. Let’s see now how this becomes much easier thanks to Arduino.

The picture above shows one of the most famous Arduino boards, Arduino UNO, which is also based on the Atmega 328p microcontroller.

At first glance you can see its advantages over the old method. The Arduinos come with all the necessary circuitry so that the microcontroller can work, that is, it is not necessary for the user to worry about these details, only the external peripherals are connected (a topic that we will deal with in tutorials).

In the case of programming, it simply connects to our computer using a USB cable provided by the manufacturer, and only the IDE (Integrated Development Environment) Arduino would be enough. Now it looks much better!

The other great advantage that Arduino introduced to the DIY world is that it is an open source project. This means that among all users they develop libraries for different peripherals and sensors so that everyone can use them and create a great community.

This feature benefits us directly with time, which in these development environments is essential. Thanks to the creation of these libraries, it is very likely that we will find one that solves our problem without much work, and this, being an open source project, authorizes us to openly use these libraries in our code.

So… What is Arduino?

Arduino is a totally free platform based on a board that includes the necessary components so that anyone can comfortably work with microcontrollers. In addition, it is the main responsible for the growing popularity of microcontrollers among people who are not proficient in the field of electronics.

It is worth noting that ESP is a development board created under the same concepts as Arduino with the only difference that they are based on another chip that is not the one present on Arduino boards. This article gives a detailed description of these boards, comparing them with the Arduinos.

LED, how to use it in your projects?